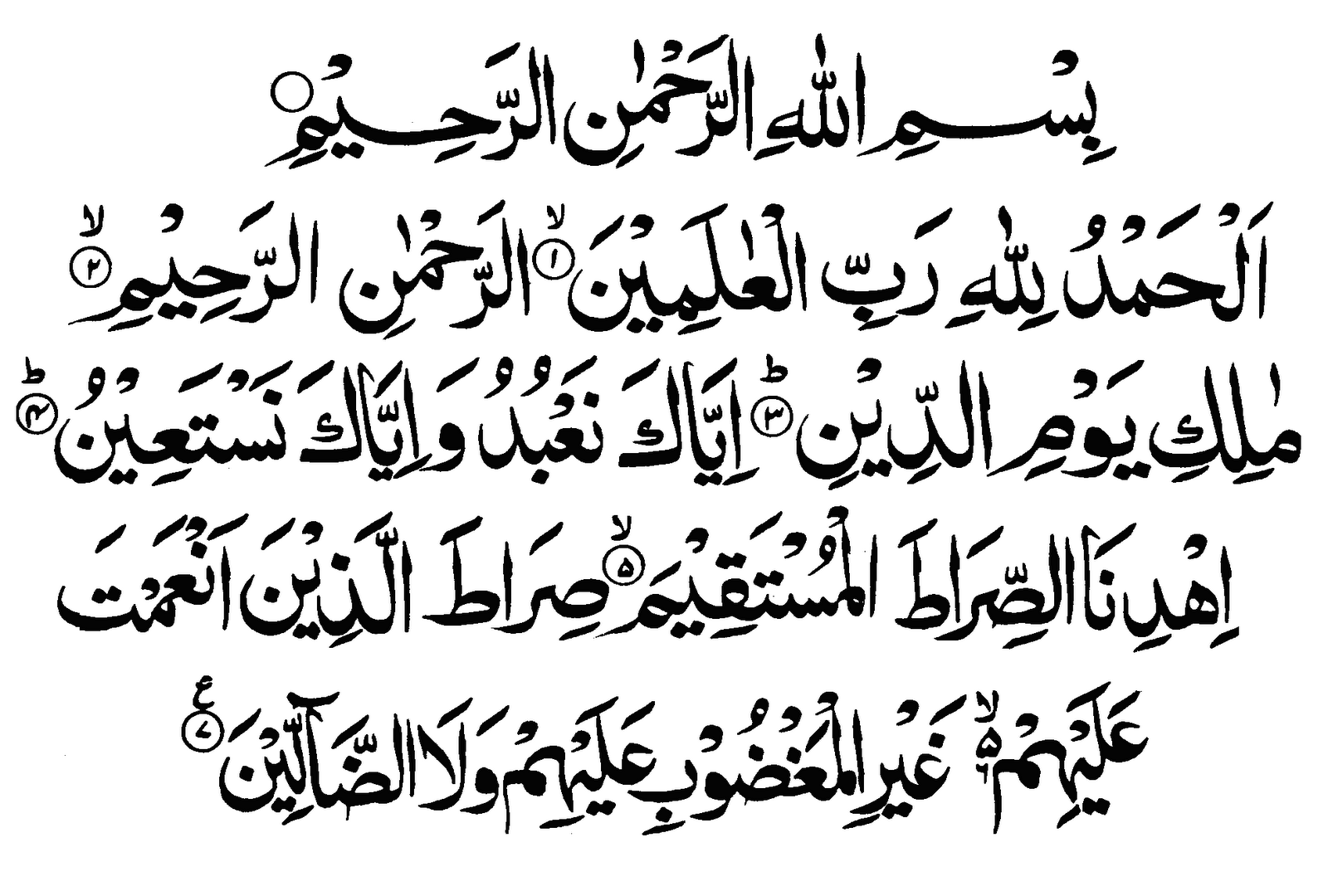 The Quran is the last Holy book of Allah. Each and every word of Quran-e-Pak is priceless for every Muslim. Surah Al-Fatiha the very first chapter of holy book Quran.

Moreover, there are 114 chapters in Quran, in which Al-Fatiha is very first chapter of Quran.

The first chapter of Quran surah Fatiha is the most easy and memorize surah in Quran. The Quran is a priceless book for the Muslims. Each and every word of this holy book is of great worth for every Muslim. Surah Fatiha has seven verses.

Here we will discuss the first chapter of Quran-e-Pak that is about “Surah al-Fatiha”, its meaning, importance, benefits, and virtues of reading it. Surah Fatiha is one of those chapters of Quran Majeed, which holds special status, and is even recalled by Allah Almighty in these words:

“AND, INDEED, We have bestowed upon thee seven of the often repeated [verses], and this sublime Quran.” (15:87)

Surah Fatiha (سُّورَةُ الفَاتِحَة‎‎) is the first chapter of the holy book Quran. Its seven verses (Ayah) are a prayer for the guidance, lordship, and mercy of Allah.

The word “Fatiha” comes from the verb “Fataha”, which means in this text “The Opener”. “Al” is a defined article and Fatiha means the opening Surah, which starts the Quran because it is that Surah which comes first in the Quran.

It was revealed in Mecca as stated by Ibn Abbas, Qatadah and Abu’l-Aliyah.

The many names of Surah Al-Fateha:

Surah Al-Fatiha is the only surah in Quran, which have 20 other names.

The popular names of this Surah are the following:

No Prayer Without Surah Fatiha:

The opinion of the majority of the scholars, among them Malik, Ash-Shafi’i and Ahmad, is that it is obligatory to recite Al-Fatihah in the prayer and that the prayer is invalid without it.

However, their opinion is based upon many proofs; from among them, the sayings of the Prophet Muhammad (sallallahu ‘alayhi wa sallam), who said that:

“There is no prayer for the one who does not recite the Opening of the Book (Al-Fatiha).”

Narrated ‘Ubadah bin As-Samit Allâh’s Messenger said, “Whoever does not recite Sûrat Al-Fatihah in his prayer, his prayer is invalid. (Sahih Al-Bukhâri, Vol.1, Hadîth No. 723).

There are many benefits, the Muslims get by the recitation of this priceless book. Every Muslim has a natural affiliation with this holy Book. The greatest chapter of Holy Quran is Surat Fatiha.

In this post, I am going to disclose Surah Fatiha benefits.

The nature of man demands keenness in every work before he starts it. He can get only that thing which he desires. Therefore, Allah almighty has made every Muslim to offer this dua for seeking the true and straight path.

Later on, Quran will guide every Muslim to success and ultimately paradise. This reflects the fact that link of Quran and Surah Fatiha is like question and answer of a pray.

During recitation, a Muslim prays to Allah for guiding and blessing him with grace. In return of this question Allah almighty answers in the form of whole Quran.

Ibn ‘Abbas narrated: “While Jibril was with the Messenger of Allah, he heard a noise from above. Jibril lifted his sight to the sky and said: “This is a door in the Heavens being opened, and it has never been opened before now.” An Angel descended from that door and came to the Prophet and said: “Receive the glad tidings of two lights that you have been given, which no other Prophet before you was given: the Opening of the Book (Al Fatiha) and the last verses of ‘al-Baqarah.’ You will not read a letter of them except that you will gain its benefit.” (Sahih Muslim)

This greatest surah of Holy Quran, Surah Fatiha is also known as Umm-ul-Quran or the mother of Quran. There are some hadith on surah fatiha, in which our Holy Prophet Muhammad (S.A.W) said,

“Do you want me to teach you a Surah the like of which has not been revealed in the Torah, the Injeel, the Zabur, nor the Quran?”, and also asked what He recited in His prayers. He replied Umm-ul-Quran (Surah Fatiha) the Prophet (P.B.U.H) proclaimed, ‘By Him in Whose dominion my soul is, nothing like it has been revealed in the Torah, the Gospel, the Psalms, or the Quran and it is seven of the oft-repeated verses in the Mighty Quran which I have been given.” (Tirmidhi)

Surah Fatiha is a matchless Surah, revealed in Holy Quran. No one can find a match for this greatest Surah of Quran. Allah did not reveal anything like this chapter in the Holy Books revealed before the Quran. There are great rewards for those who recite surat Fatiha.

Muslims recite this surah in every prayer. Indeed, our prayers are incomplete without the recitation of surah Fatiha. This surah has the summary of whole Quran in it. One can understand the meaning of Quran by understanding this chapter.

There are many names of this greatest surah. Recitation of this chapter is the best treatment to cure many diseases as one name of it is Ash-Shifa. To cure poison, this Surah is very effective.

To get rid of poverty, one must recite this matchless surah. It is helpful in removing poverty. The recitation of this chapter also brings new ways for its readers to clear debts by the mercy of Allah Almighty.

To remain safe from the fear of enemies, one must recite this chapter. The readers of this surah come under the protection of Allah, the greatest protector in this world. Recite this chapter regularly and get rid of all kinds of fears.

This greatest Surah of Quran is a source of enlightenment for its readers. Reciting this chapter Fatiha, one gets a way to get the favor of Allah. The Surah is really effective to light up the spirit of faith in the heart of a Muslim. Start your deeds with the recitation of this chapter and get help from Allah.

This chapter is a source of acceptance of dua. After the 100 time reciting of surah Fatiha every pray will be surely assented.

The holy Prophet Muhammad (Peace Be Upon Him) says: surah al-Fatiha is Cure from every illness and disease. Hazrat Abu Saeed al-Khudri narrates:

“While on a journey we halted at a place. A girl came to us and said: “The chief of this tribe has been stung by a scorpion and our men are not present, is there anybody amongst you who can recite something upon him to treat him?” Then, one of our men went along with her although we did not think that he knew any such treatment. However, our friend went to the chief and recited something upon him and the chief was cured. Thereupon, the chief gave him thirty sheep and gave us all milk to drink. When he returned, we asked our friend: “Did you know anything to recite upon him to cure him?” He said: “No, I only recited Umm al-Kitab (i.e. Surah al-Fatiha) upon him.” We said that do not do anything until we reach Madinah and ask the Prophet regarding this (practice and reward-whether the sheep were lawful or not for us). Upon reaching Madinah, we narrated this to the Prophet (PBUH), whereupon he remarked: “How did he come to know that Al-Fatiha can be used as a cure? (PBUH) Distribute your reward amongst yourselves and a lot a share for me as well”.” (Sahih Bukhari)

One of the biggest benefit of recite this surah is, In very pain recite Surat Fatiha the pain will vanished.

The reciting of  this Surah between the Sunnat And Fard of Namaz-e-Fajr 41 times and blow it on water, give it to any patient it will get well soon.

Chapter Al-Fatiha is complete and perfect Dua which Allah himself teach to Muslims. Therefore every Salah is invalid without it.

A cure for the heart:

This Chapter of Qura’n have a supplication for protection from misguidance and from the anger of Allah Almighty. So this chapter of Quran protects the heart from corrupt knowledge and offensive motives.

To conclude, there are a number of benefits of surah Fatiha. It is different from the other chapters of Holy Quran. For seeking guidance from Allah and to get the flavor of Allah, no surah of Quran is as effective as Surah al Fatiha is.

Hafiz Ali - November 14, 2017 0
Dua Before Eating: Here you will learn about the dua before eating meal/Supplication before eating. It is the most important part of one’s life that one...