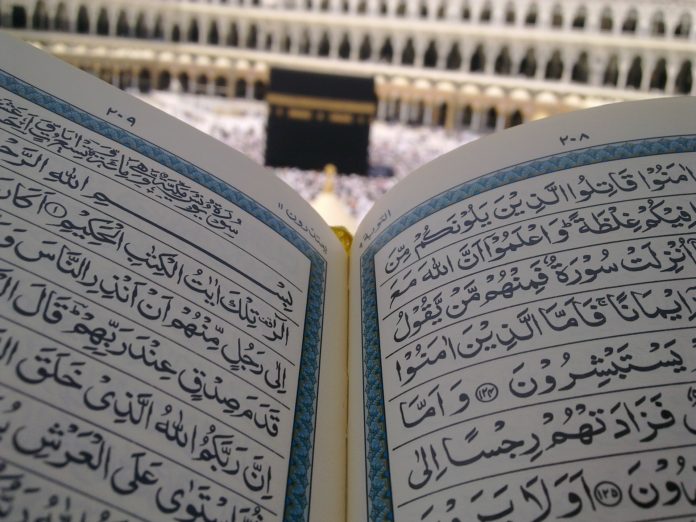 The name of the Holy Book of Islam is Holy Quran (Koran). The Islamic Holy Book was revealed to Prophet Muhammad (S.A.W), the last prophet sent by Allah to humanity as claimed by the Muslims.

The revelation of Quran was started in 609 AD by the angel Gabriel and it was completed in a period of 23 years approximately.

During the revelation of Holy Book of Islam, the companions of Prophet Muhammad(P.B.U.H) used to record and memorize every part of it revealed.

In 650 AD, the publication of the first version of  Holy Book of Islam took place.

Muslim Holy Book name is known as Quran. It is the Holy Book of Muslims who recite its chapters and verses that are totally revealed by ALLAH Almighty.

Moreover, It is the complete set of instructions about how to be a good Muslim. It includes miracles, way of living the life, good and bad deed directions, about Heaven, Hell and much more.

So, it is the complete code of life. You could gain an ultimate peace of mind and heart by reciting and understanding it.

Quran is the final Holy Book Islam. Before Quran, Holy Books were revealed but after the revelation of Holy Quran, no book is going to be revealed by Allah now.

Jews could not keep Torah saved. The copy of Torah now accepted as a religious book has been written by some Jews Scholars. The same happened with the Holy Book Psalms revealed to Prophet Dawud (A.S).

Also, Jesus could not have time to keep the revelations of Bible saved in a written form. The Bibles present today have some differences and additions and these have been approved later by a council of bishops.

This is not the case with Islamic Holy Book, Quran.

Allah has taken the responsibility of the protection of Quran and it is saved even now in its original form as compared to the previous Holy Books.

What is the meaning of word Quran?

Do you know the meaning of Quran?

Different names have been given to the Holy book Quran, but the most common name of it given by Allah is Quran.

The word Quran has also been repeated in the Holy Book 68 times. There are two different meanings of the word Quran.

The second meaning of Quran ‘to Read’ is considered to be accurate meaning as the Muslims have been asked to recite the book for guidance and also because of the fact that Allah started the revelation by the word ‘Read’.

The Islam Holy Book has been divided into 114 chapters. There are 30 different parts of it and each part is named as ‘Juz’.

Division of Quran into chapters and parts makes recitation of Quran easier for the Muslims as Muslims love to recite this sacred book which is a complete code of life.

The chapters of Holy Quran have not been arranged the same way in the present copies of Quran as these were revealed to Prophet Muhammad (S.A.W).

Holy Quran addresses all the people of all the ages. It speaks to mankind generally without considering differences in race, color, tribe and financial status. Its teachings are for all the human beings. Its teachings provide a general road map for the welfare of all the mankind.

More importantly, the main purposes behind the revelation of this final code of life are given below that clarify the importance of the Holy Book.

The tenants of the religion Islam have been described in a unique way in Holy Quran. The main features of Quran include:

To conclude, Holy Quran is a book of wisdom. The writing style of Quran is completely different from human style. The way the book has been written is humanly impossible.

Not the Holy Prophet (S.A.W), but Allah is the author of this sacred book of Islam. The scientific truths that have been found and are being found now were discussed in Holy Quran centuries ago.

Remember,  The Quran is accurate and valid and free from additions and superstitions by human beings and covers all the present and future aspects of our life and it is right to say it a book of wisdom.