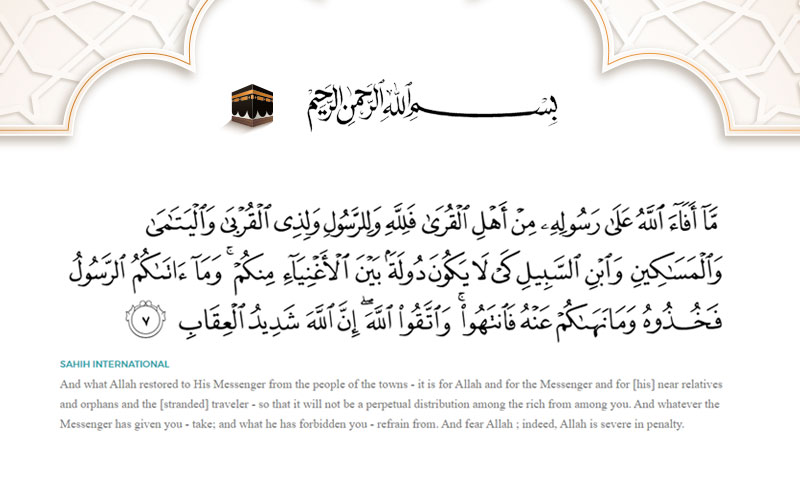 Surah Al-Hashr was revealed in Madina. It is the 59th Surah in the Holy Quran with 24 verses.

This Surah was revealed after the battle of Bani An-Nadhir. This was a battle fought against the Jews of Madina who started opposing Islam openly after the Battle of Badr.


Surah Al-Hashr opens with Allah proclaiming: (59:1) Whatsoever is in the heavens and whatsoever is on the earth glorifies Allah. And He is the Almighty, the All-Wise.

The Jewish tribes that were settled in Madina were four in number. However, Banu Nazir and Banu Quraizah were the most prominent.

As Yathrib was under Jewish domination, they, at the beginning, did not allow the Aus and Khazraj tribe to gain some control.

That is the reason why they settled on lands that were not yet been brought under cultivation. Therefore, they hardly produced for their own survival.

However, with the help of Ghassanide’s, they were able to gain complete dominance over Yathrib, forcing the Jews to establish their headquarters outside the city.

At that time the main features of the Jews position were as follows:

When Islam came to Yathrib, the first thing it created within the people was brotherhood and unity.

When the Jews witnessed the development of brotherhood within the people, they understood that they would not be able to create any discord between them.

Moreover, the Holy Prophet (P.B.U.H) had put an end to the unlawful and mutual dealings.

This made the Jews realize that it might be a disaster for their economy. This was the reason why the Jews had a national ideal of resistance and opposition to the Holy Prophet (P.B.U.H).

The first Jewish tribe that was exiled was Banu Qainuqa, who started to harass the Muslims openly after the Battle of Badr.

That is also how other tribes were exiled. They were the Jews who broke their treaty that was signed with the Holy Prophet (P.B.U.H).

Some of the Jews settled at the Khyber, a place near Madina, and some went to Syria.

Wazifa for Having Success in Every Work Done:

1. If four Raka’ats are offered with Surah Al-Hashr recited in it, then the person will be successful in every important work he does with the condition that it is not a sin.

2. If Surah Al-Hashr is recited for a time period of forty days without missing a day, then it will make even the hardest task easier.

Surah Al-Hashr is a Surah with which you gain success in every aspect of your life whenever you recite it. The person who recites it on a regular basis will be regarded as a martyr when he/she will die.