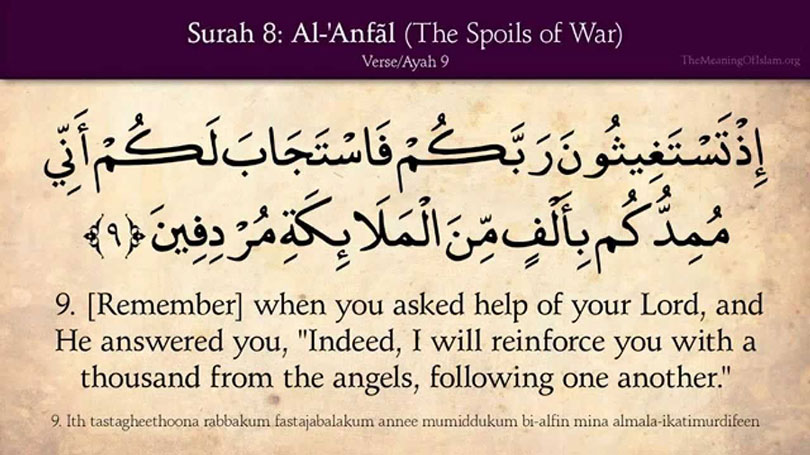 Surah Al-Anfal is the 8th Surah of the Holy Quran and comprises a total of 75 verses. It was revealed in the 2nd year of Hijrat and was completed after the battle of Badr. Therefore, it deals with the military conducts and operation.

However, the Battle of Badr is not mentioned with its name in this Surah, but it describes the condition of the battle several times.

The following Ayah of this Surah describes the situation of the Battle:

“Remember ye were on the hitter side of the valley, and they on the farther side, and the caravan on the lower ground than ye. Even if ye had made a mutual appointment to meet, ye would certainly have failed in the appointment: But (thus ye met) that Allah might accomplish a matter. For to Allah do all question go back (for decision).” (8:42)

The above Ayah makes it certain that the victory achieved by the Muslims is because of Allah’s help without which they could have never succeeded against the huge army of Makkah.

Before discussing the main reasons that resulted in the occurrence of the Battle of Badr, it is important to know why it took place.

Firstly, Islam was not completely settled even after the migration as there were only a few believers that accepted the faith.

Secondly the Muslims were not in a condition to fight against those who had spread the chaos that left the moral rights invaluable.

Lastly, the Muslims have not even got an opportunity to demonstrate their religion completely.

Seeing this as a weakness, the Quraish planned to take over the Muslims. Their main focus was to assassinate the Holy Prophet (P.B.U.H), so that no one goes against their old culture.

The first main theme of this Surah relates to the Battle of Badr. All the rules of war are also mentioned.

The second theme is related to the belief in Allah through the act of sacrifice to gain martyrdom.

About The Battle of Badr:

Another name for this battle is ‘Ghazwa e Badr’.

The Battle of Badr was fought on Tuesday on 13th of March in the 2nd year of Hijrat. It was fought against the people of Makkah who belonged to the tribe of Quraish.

It was fought for the purpose of protecting and fostering Islam.

In this battle, there were 313 Muslims with a total of 6 Armored soldiers, 8 swords, 70 camels and 2 horses.

Whereas the non Muslim army was 1000 in number. They were well equipped with 600 Armored soldiers all carrying weapons. They had 700 camels and 300 horses.

The non Muslims reached the Badr and occupied all the important places with resources, whereas the Muslims had occupied the left over places with no well of water.

However, the Almighty Allah showed a miracle of rain at night from which the Muslim army collected enough water for them.

There was also a fierce wind that blew at night. This blew away all the tents of non Muslims while they were enjoying gambling as it seemed to them a definite victory and the end of Muslims.

The following are the related Quranic verses that say:

“When He caused calm to fall on you as a security from Him and sent down upon you water from the cloud that He might thereby purify you, and take away from you the uncleanness of the Shaitan, and that He might fortify your hearts and steady (your) footsteps thereby”(8:11).

Another saying from the Quran says:

“I am with you: give firmness to the Believers: I will instill fear into the hearts of the Unbelievers: Therefore strike off their heads and strike off every fingertip of them.”(8:12).

In this battle the Muslims gained victory. This battle proved to be of great benefit for the Muslims as in it all the remaining people who survived accepted Islam except two people.

Muslims only lost 14 people, whereas in case of non Muslims, 70 were killed and 70 were taken as captives who were treated very kindly.

This is a very easy Wazifa. The only thing you have to do is to recite the 62nd Ayah of this Surah 7 times before entering the examination hall. Make sure you have performed a fresh Wudu to attain good results.

With this, the exam will become easy for you and you will get good grades, which is desired by every person.

I hope this article was proved to be helpful, especially for those who still have a journey of seeking knowledge and becoming successful.