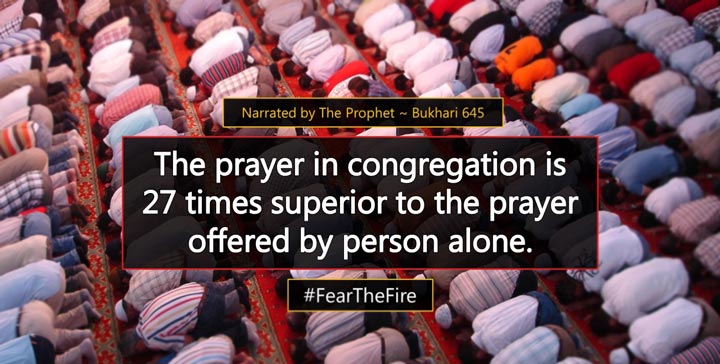 A Muslim bows down in front of ALLAH (SWT) five times a day and he by prostrating shows the sheer humility. It is one of the most important pillars of Islam. At Salah times the Muslims offer prayer with congregation which is the beauty of Islam that shows the unity.

Salah is the Arabic word which means the worship. It is used specifically for the Muslims prayer. Salah is used to signify the Muslims act of worship which they perform five times a day. The Salah (namaz) is the act of worship that distinguishes a Muslim from a non Muslim.

There has been given more importance to Prayer in the Islam as it is the act worship which has social, mental, physical and spiritual benefits.

It is also a source to meet people and know about their problems as the Muslims offer Salah at Masjid with congregation and meet with one another five times a day. So they are better able to share the problems with each other at Salah times.

Enacting the Salah to get closer to ALLAH (SWT):

As Salah is one of the important acts to worship ALLAH (SWT) so it is a way to get closer to the ALLAH ALMIGHTY. When a Muslim performs Salah five times a day that means he has the fear of getting punishment if he does not offer the Salah. The person who is regular and punctual at offering Salat at Salah times he has not fear on the day of Judgment as he/she will receive his book of deeds in his/her right hand.

Importance of performing Salah on time:

Salah is the act of worship that has been emphasized to be performed on fixed time. These fixed times as discussed before are clearly described in Islam. Salah times are being set on the movements of the sun if one is not able to understand these movements can easily set the times by checking the Salah times on the internet.

Salah is one of the important religious obligations that have benefits in this world and hereafter. By offering Salah we can get physical as well as spiritual benefits that are as follows:

Jummah Prayer Benefits – The Importance of Friday Prayer in Islam