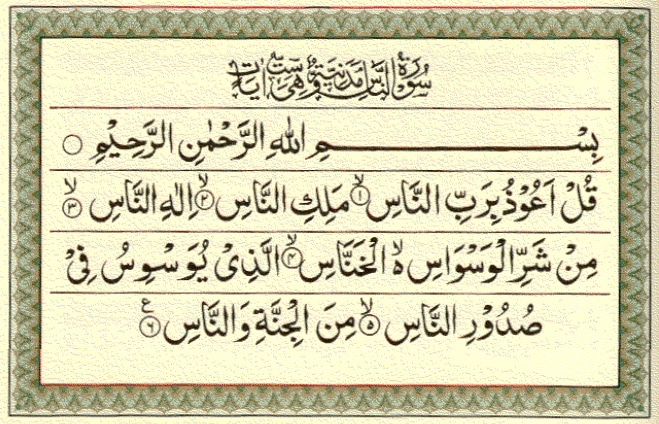 There are 114 chapters in the Quran, in which Surah al Naas is the last chapter of the Quran. The chapter An-Nas meaning is “The Mankind”,  was revealed in the holy city of Mecca, so from this perspective, this is the Makki Surah.  The Surah consists of 6 verses and it is so easy to memorize.

The Last Chapter of Quran:

Amongst the 114 chapters of the Quran, al-Naas happens to be the last Surah. Given that, it somewhat responds to the first Surah i.e. Surah Al Fatiha, and the message of the rest of the Quran. It says that although we have been given a complete guide to living in the form of Quran, we need to pray to Allah alone, and put our trust and faith in Him, instead of becoming dependent on His creations.

“The Messenger of Allah (pbuh) said, “Satan waits perching on the heart of man. When man mentions Allah, he keeps down; when man is heedless, he causes delusions.” (Bukhari, Tafsir, Qul audhu birabbinnas 1)

When we recite the chapter An-Naas, we run across three Names of Allah: Rabbi An-Naas, Malik An-Naas and llah An-Nas.

Additionally, Quran transliteration in English reveals that Fir’awn used the exact same three names for himself. What does that mean…? It means that there is something important this Surah is telling us, something we need to pay close attention to, something that cannot be overlooked.

Surah Nas Tafsir and Transliteration is easily acquired and often studied. What remains unexplored is its importance and Surah al-Naas benefits. I have, therefore, mainly stressed upon those throughout the course of my article.

The human that you are, you are in constant danger from sources outside of you and those inside you. The main source of danger identified in this Surah is the whispering of the Satan. Allah is Al-Muhaymin and Al-Aziz. He is the one who controls you and everything that happens to you. Nothing and no one can can function without His will and command. This Surah tells us to keep this in mind at all times, so that we can follow the Quran where it says,

Why was Surah Al Naas Revealed?

Our creator loves us more than we can humanly imagine. He wants us to prove our love for Him by fighting against our biggest enemy, Shaitan. To help us in our battles he sent down the miraculous Quran, hence, all chapters of the Quran were revealed for a specific reason and purpose. If you want the Quran to benefit you in your life on earth, it only becomes essential to understand these purposes, so you can apply them to your current situations.

Conditions of Arabia when Surah an Naas was revealed:

As the Holy Prophet (SAW) increasingly spread the message of Allah across Arabia, oppressors began to be more oppressive. They made every attempt to hurt the Prophet (SAW), and to create obstacles for him in his mission. Plans to kill the Messenger of Allah (SAW) were made under the cover of the night, charms were used to try to make him feel ill, followers of the Prophet were provoked by the whispers of the Shaitan to go against the words of Allah, and this is just the tip of the iceberg.

In Muharram, 7 A.H., a group of Jews went to a famous magician, Labid Bin Asam. They offered him gold coins in exchange for an agreement that he would cast a spell on the Prophet (SAW). A spell was then cast on the hair and the comb of the Prophet (SAW). These items were then placed under a stone in a well named Dharwan. As a result of the magic, Prophet Muhammad (SAW) became severely ill. This illness consumed him from within; others could not see any symptoms. He, however, remained steadfast in his duties as the slave of Allah. After several days, Hazrat Jibraeel (A.S) descended and informed the Prophet (SAW) that he was under the effect of black magic. He also gave out details regarding the items that had been cursed. The Prophet (SAW) then sent Hazrat Ali to the well, who found a bow with eleven knots apart from the hair and the comb.

Surah al Falaq and Surat Al-Nas share a common theme. They are, hence, referred to as Mu’awwidhatayn. They were revealed as a cure for the magic that the Prophet (SAW) had been bounded by. The two verses are composed of eleven verses together, and with the recitation of each verse, the eleven knots of the bow were unknotted. The Prophet (SAW) thereby was freed from the shackles of the evil magic.

The virtues and importance of Surah an Naas have been highlighted in many authentic traditions. Different ahadith signify the surah importance.

Uqbah b. ‘Amir Narrates: The Messenger of Allah (may peace be upon him) said to me: There have been sent down to me verses the like of which had never been seen before. They are the Mu’awwadhatain. (Sahih Muslim Bk.004 Ch.136 No.1775)

The reality of black magic cannot be denied. In this era where blood relatives get envious of their closed ones, you are more vulnerable to attacks from evil jinns who work for their evil masters. Surah al Falak and Surah an-Nas are a gift to us by Allah, which we can use to seek His refuge from internal and external evils. The whispering of the Satan, attacks from jinns, evil eye of those around us, jealousy and envy are all poisonous enemies that these beautiful chapters can safeguard us from.

Ibn Al-Qayyim said: The effectiveness of these chapters is great to repel magic, evil eye, and the rest of the evils and the need for a slave to seek Allah’s protection from these two surahs is greater than his need for self, eating, drinking, and wearing dress.

The Messenger of Allah (S.A.W) used to seek refuge with Allah from the jinn and from the evil eye until the Mu’wadaitain were revealed, and when they were revealed he started to recite them and not anything else. (Narrated by al-Tirmidhi, 2058; he said it is hasan ghareeb)

“While I was leading the Messenger of Allah along one of these paths he said, ‘O Uqbah! Will you not ride?’I was afraid that this might be considered an act of disobedience. So the Messenger of Allah got down and I rode for a while. Then he rode. Then he said, ‘O Uqbah! Should I not teach you two surahs that are of the best two surahs that the people recite?’ I said, ‘Of course, O Messenger of Allah.’ So he taught me to recite ‘Say: I seek refuge with the Lord of Al-Falaq.’ (Surah al-Falaq, Qur’an Ch.113) and ‘Say: I seek refuge with the Lord of mankind .’ (Surah an-Nas, Qur’an Ch.114) Then the call was given to begin the prayer and the Messenger of Allah went forward (to lead the people), and he recited them (the two surahs) in the prayer. Afterwards he passed by me and said, ‘What do you think, O Uqayb? Recite these two surahs whenever you go to sleep and whenever you get up.’” (Musnad Ahmad)

This hadith was also recorded in Sunan al Nasa’i and Sunan Abu Dawud.

The beloved wife of the Prophet (S.A.W) Hazrat Aisha (R.A) is reported to have said: Whenever Allah’s Apostle became sick, he would recite Mu’awwidhatayn (Surah al-Falaq and Surah al-Naas) and then blow his breath over his body. When he became seriously ill, I used to recite (these two chapters) and rub his hands over his body hoping for its blessings. (Sahih Bukhari)

The An-Naas Tafsir should also be studied, to gain denser understanding of the words of Our Allah. This will not only clarify the surah meaning for you, but will also allow you to feel the verses on a much deeper level.