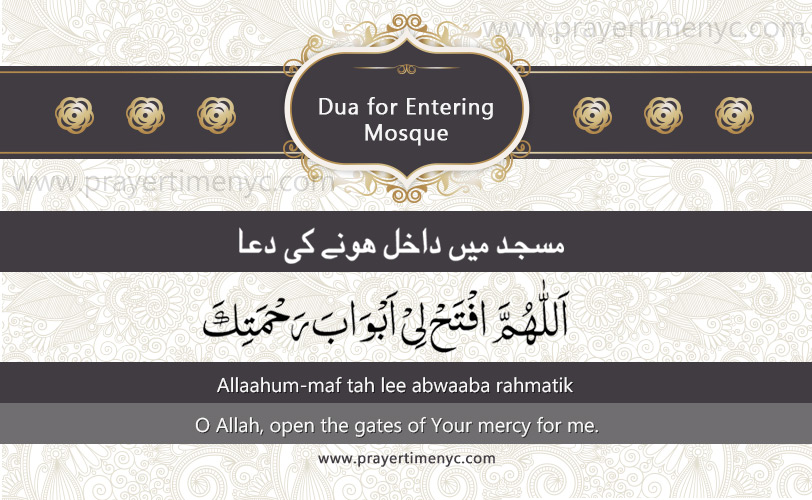 Here you will learn about the dua for entering mosque (Masjid me dakhil hone ki Dua).

This word; Dua, is an Arabic word. It means a prayer or a supplication.

There are certain dua’s for your every single act prescribed mandatory for every Muslim in this world.

Dua When You Entering the Mosque:

When you are going for prayer to the mosque, you must recite the following supplication upon entering the Mosque (مسجد میں داخل ہونےکی دعا);

Invocation Upon Entering a Mosque:

When entering the mosque, recite durood-e-pak and Salaam first and thereafter recite:

Abu Usaid said: The messenger of Allah, May Allah send upon him blessings and peace, said: When one of you enters the mosque he should say:

“Oh Allah! Open for me the doors of your mercy.“

Abu Dharr reported: I said: Messenger of Allah, which mosque was set up first on the earth? He said: Al-Masjid al-Haram (the sacred). I (again) said: Then which next? He said: It was the Masjid Aqsa. I (again) said: How long the space of time (between their setting up)? He (the Holy Prophet) said: It was forty years. And whenever the time comes for prayer, pray there, for that is a mosque; and in the hadith transmitted by Abu Kamil (the words are):” Whenever time comes for prayer, pray, for that is a mosque (for you).” (Sahih Muslim)

To conclude, Memorize and recite this dua for entering the mosque and dua while leaving mosque, when you go out for prayer.

So, it is obligatory for every Muslim to make dua before eats, Dua before sleep, Dua before travels, goes out, or enters the home, etc.