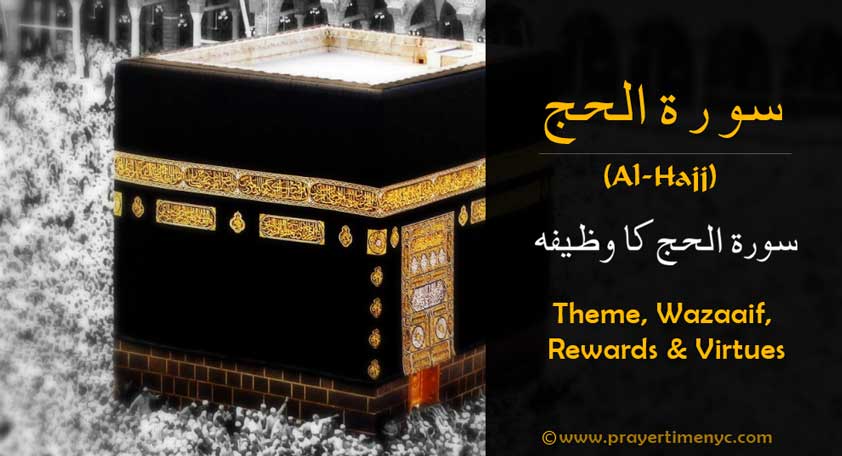 Are you looking for complete information about Surah Al-Hajj theme, wazaaif, rewards and virtues. Chapter of Quran al-Hajj is madni and 22th chapter of Quran,

There is some difference in opinion about being the Surah Makki or Madni. The characteristics of Surah Al-Hajj show that initial verses of this Surah (verses 1-24) were revealed a little before migration, in the last stages of Holy Prophet’s Makki life.

The second part of Surah Al-Hajj (verse 25-78) was revealed at the first stage of Holy Prophet’s Madni Life. So I can say that Surah Al-Hajj is considered to be both Makki and Madni Surah.

Another sign of being this Surah a Madni one is the sudden change of style from verse 25 to 78. This part is supposed to be revealed in the very first Hijrah Year in the month of Zul-Hijjah.

This can also be confirmed by reading verses from 25 to 41, precisely from verses 39 and 40.

“Permission [to fight] has been given to those who are being fought, because they were wronged. And indeed, Allah is competent to give them victory”.

[They are] those who have been evicted from their home without right- only because they say, “Our Lord is Allah.” And were it not that Allah cheeks the people, some by means of others, there would have been demolished monasteries, churches, synagogues, and mosques in which the name of Allah is much mentioned. And Allah will surely support those who support Him. Indeed, Allah is powerful and Exalted in might.

According to some great reviewers of Islamic History and Quran, like Urwa Bin Zubair, Muqatil Bin Hayyan, Ibn Abbas & Qatadah, Verse 39 is the very first verse which grants Muslims the permission to start a war against the Mushriks and non-believers of Islam.

It is also obvious from various Hadith and Books that after the revelation of this verse, Muslims started preparations of war against non-Believers, and in the 2nd A.H, in the month of Safar, they were sent to the banks of Red Sea.

That is where the mission of Al-Bawa took place.

More about the last verses of Surah Al-Hajj:

As the name of Surah Al-Hajj suggests, some of its verses are about a pilgrimage. That is why it is called Surah Al-Hajj.

It was the time when Muslims were barred to enter Makkah to perform pilgrimage, when this Surah was revealed.

The immigrants had some nostalgic recollections of their time spent in Makkah during the month of Zul-Hijjah. Immigrants must have feelings for their Holy and blessed city of Makkah.

Memories of performing Hajj in Makkah must have come to their mind and thoughts of being banned by Mushriks of Quraish to visit there Holy places.

The Believers might be praying to Almighty Allah and seeking for His Heavenly  permission to wage a war against those enemies of Islam, who expelled them to visit there Holy places to act upon is an Islamic way in its true spirit.

It was at this point of time when these last verses were revealed by Allah Almighty. This Surah has a clear message for Mushrikeen of Islam, The True Believers of Islam, and for those Muslims who were dithering.

There is warning for Mushrikeen in a very vigorous way and they are also cautioned of their article of faith.

Facts about Tauhid and the life after death are also mentioned strongly in this Surah for Mushriks.

Message for Believers of Islam:

The believers are deleted in two ways, specifically and generally.

Being specific, in accordance to the domination of Quraish and their wrong deeds, Muslims were allowed to go to war against them.

It is in this Surah, that Believers of Islam were officially named as “Muslims”.

Message for Muslims who were Dithering:

There is also a message for Muslims who were wavering, and they are questioned about their faith very strongly. That when there is peace and stability, you worship Allah and when there are hardships, you cease to remain an Allah’s servant. This attitude will not help them at all.

It is also communicated to wave red Muslims that by dithering Allah, you cannot avoid the fortunes Allah has ordered for them.

In verse 16, there is a message for them who seeks guidance.  Holy Quran is the light of guidance for all Muslims, but guidance itself is directed by Allah’s will, and He is the one who can give guidance by His grace.

Some Wazaaif of Surah Al-Hajj are:

Read the benefits of surah Al-Hajj. One should recite Surah-Al Hajj with complete deliberation and expression to get its reward and virtue, and this deliberation will certainly lead one to perform pilgrimage.

Besides, there are a lot of other blessings that are showered on the reciter of this surah, that can be beneficial for him/her in this life and hereafter.

It can be concluded that Surah Al-Hajj has a great importance in our daily life. Reciting this Surah has a great virtue. Equal to the reward of performing the pilgrimage (Hajj).

As the name of this Surah suggests,  some of its verses are about pilgrimage. It has the message of Jihad as well. It reclaims the territory and the sacred places of the Muslims. Moreover, Reciting this Surah Al-Hajj with complete belief and deliberation will certainly lead one to perform pilgrimage.