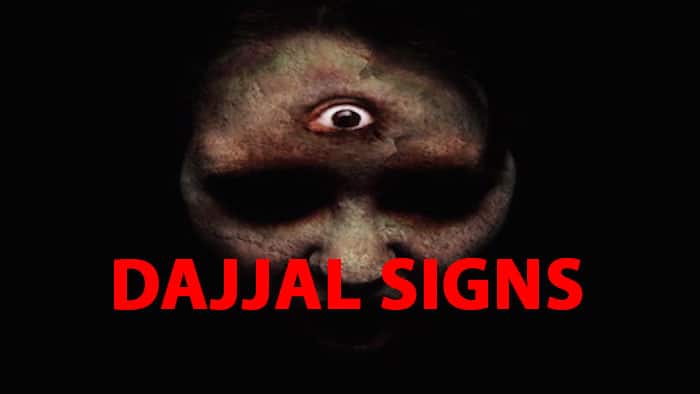 The False Messiah Dajjal (المسيح الدجّال) who is also known by Kana Dajjal. There are some major signs and minor signs of dajjal arrival, which I am going to share with you that when the messiah dajjal appearance will happen.

Who is Dajjal in Islam?

A lengthy hadith narrated by Ibn Majah, Ibn Khuzaimah, and ad-Dhiyaa’, attributed to Abu Umamah, reports that the Prophet of Allah, Hazrat Muhammad (Peace Be Upon Him), said:

“The fitnah of Al-Ahlas (continuous calamity) is mass desertion and war. Then, the fitnah of As-Sarraa [meaning ‘the rich’, when some reach people use their money to hire others to fight for them] will start from under the feet of a man who claims that he is of me (of my descendants). However, he is not of me, for my loyal friends are the ones who have taqwa. Afterwards, people will unite around a man whose reign is unstable. Then, the fitnah of Ad-Duhaymaa [it is called ‘dark and black fitnah’ because of its enormity] (will start) and will not leave any member of this nation without severely touching him. When it is thought that its time has come to an end, it will be lengthened. Meanwhile (during this fitnah), a man will wake up as a believer and will meet the night as a disbeliever, until people divide into two camps: A camp of belief that contains no hypocrisy, and a camp of hypocrisy that contains no belief. If this happens, then await the Dajjal on that day or the next.” [Ahmad, Abu Dawood and al-Hakim, Mishkatul-Masabih, vol. 4, no. 5403]

Moreover, there are other Al-masih ad-Dajjal signs of his coming to the imminent coming of the fitnah of Dajjal. Mu’ath narrated that the Messenger of Allah, sallallahu ‘alaihi wa sallam, said:

Here is the list of minor signs of dajjal coming. The holy Prophet Muhammad (Peace Be Upon Him) prophesied of the last age that Dajjal has been identified:

“Allah’s Messenger came to us all of a sudden as we were (busy in a discussion). He asked: What are you discussing? (The Companions) replied: We are discussing (the subject of) the Last Hour. Thereupon he said: It will not come until you see ten signs. And (in this connection) he made a mention of the ‘smoke’, ‘Dajjal’, the ‘beast’, the ‘rising of the sun from the west’, the ‘descent of Jesus son of Mary’, ‘Gog and Magog’, ‘sinkings of the earth in three places, one in the east, one in the west and one in Arabia’ at the end of which ‘fire would burn forth from Yemen, and would drive people to the place of their assembly’ (i.e., the place where mankind will be assembled for judgment).” (Sahih Muslim)

Here are the signs of evil dajjal arriving of the last day as Prophet Muhammad (peace and blessings of Allah Most High be upon him) said:

What Quran Says about Dajjal:

In conclusion, it follows that his return must come chronologically at the end of the list. We also know that the fire from Yemen would follow the third earthquake. And we see that it appears that the major earthquake in the east has occurred. Now we  are awaiting four more major signs that still remain to occur.

Hafiz Ali - May 27, 2017 0
Dua for Sehri: Sehri ki Dua: Do you intend to be showered by Allah's forgiveness, rewards, and blessings this Ramadan? So all you need to...