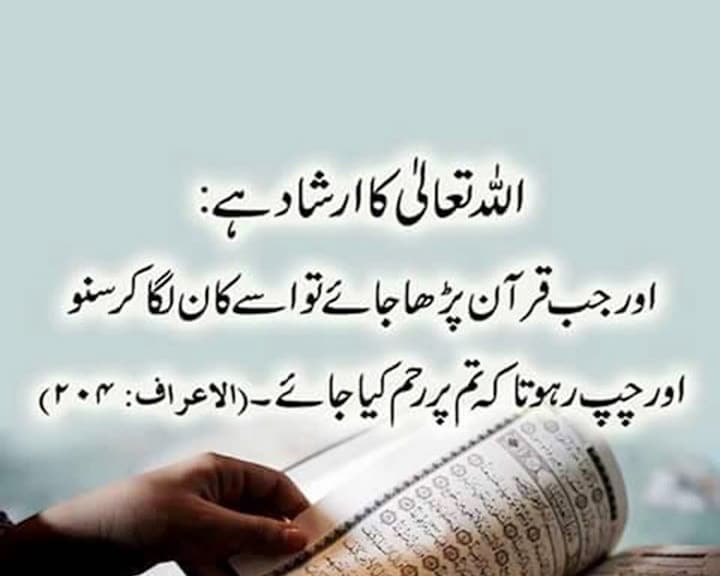 The Holy Quran is a message from Allah Almighty to humanity. It was transmitted to us in a chain starting from the Almighty Himself to the Archangel Jibreel (A.S) to Prophet Muhammad(P.B.U.H) and then to us.  The message was revealed to prophet(P.B.U.H) in pieces over a period spanning approximately 23 years.

Quran is the Holy book that Allah gave to His Messenger Muhammad(P.B.U.H) through revelation, and which Hazrat Muhammad passed on to the humanity in the form in which we know it today.

The internal evidence provided by the Holy Quran itself, as well as historical research, proves that the original Quranic text has not been changed or is likely to be altered in the future. This is a unique attribute of the Quran and is not shared by any other revealed book now extant.

The Holy Quran embodies the deen (The System of life) revealed to the earlier Anbiya (Messengers of Allah) in its true and perfect form. The mode of expression of the Quran is neither poetry nor prose, but has its own style and rhythm. It has a rare beauty and grandeur, and is sublime.

This Book does not give us merely a code of ethics; it provides us with a code of life which embodies guidance, principles, values and laws relating to every sphere of human life and natural phenomenon.

The Holy Quran, according to Islam, is the final authority in matters of deen. The values, injunctions, and the principles enshrined in the Book form the corner stone of the Islamic polity and the limits laid down by it provide the framework within which the laws of the Islamic State may be formulated. These principles, or limits, or framework, are immutable, but the statutes made by the State within these four corners are open to modification and change according to the needs of the times.

The Quran is the last of the Divine Books, because Messenger-hood ended with Muhammad(P.B.U.H). No subsequent human opinion or pronouncement in matters of deen, therefore, can be recognized as authoritative; nor can any man-made law repugnant to the Quran be regarded as binding upon the Muslims. The Quran is a book of guidance for all mankind and transcends the barriers of time and space.

The Islamic State is an instrument for the enforcement of the Laws and Injunctions embodied in the Quran. The two most important things in ISLAM are:

However not everyone understands it, therefore, it becomes necessary for us to refer to the translations of the Holy Quran in our own language! But with three considerations: