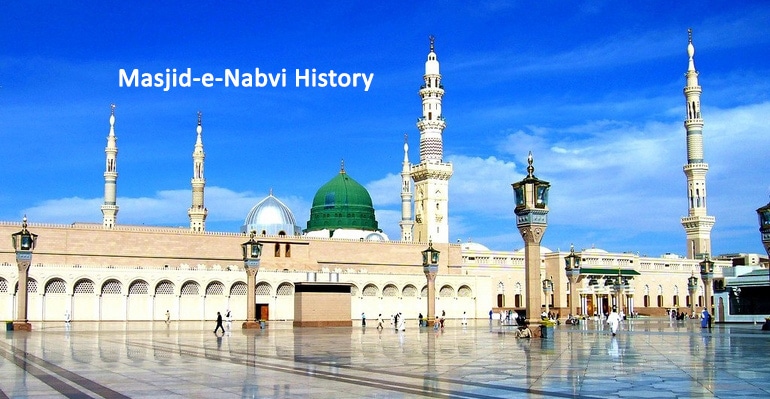 Masjid Nabvi (Prophet’s Mosque) is the second holiest mosque or site in Islam and it is also one of the largest mosque in the world.

..Masjid-e-Nabvi is located in Madina, Saudi Arabia and always opens even in day and night.

The pilgrims come for performing hajj; also visit the Masjid Nabvi because of its significance. Let’s take the detour back in time to know the Masjid-e-Nabvi history.

More importantly, this mosque is the second largest and most beautiful mosque around the World.

In 622 CE, the Prophet Muhammad (S.A.W) migrated to Madina from Mecca, he built the mosque by himself in Rabi-ul-Awwal, 1 Hijri. And the foundation of Masjid e Nabvi was laid by him.

The original mosque was built with unbaked bricks and foundation was made of stones. Columns of the mosque were built with the stalk of palm trees. The prophet Muhammad(S.A.W) covered the roof with branches of palm trees.

Moreover, The original dimension of the Masjid-e-Nabvi mosque was 35*30 meters.

After the battle of Khyber, Prophet Muhammad (S.A.W) ordered the Sahaba (companions) to extend the Masjid e Nabvi because more people entered into Islamic circle.

However, Hazrat Usman  paid for an additional land of the mosque.

Renovation and Extension in Caliph’s Reign:

In Hazrat Abu Bakr (R.A) reign, some of the tree stems of the columns worn out. So, he replaced these columns with similar trees and covered the roof with palm tree branches.

As the population of Muslims grew significantly, people requested the caliph to extend the mosque. Hazrat Omar Farooq (R.A) in 17H extended the whole Masjid Nabvi mosque by ten meters to the west, five meters to the south and fifteen meters to the north.

The roof was increased by five and a half meters and a new door was added in western wall known as Bab Salam. The western boundary of a mosque was extended up to seven columns from the podium. So, new dimensions become 70*60 meters.

After Hazrat Usman extension no changes were made on the southern side so it is still placed in original position.

There were many extensions made after the Caliph’s reign by Omayyad ruler, Abbasid ruler. There were two fires in the mosque so it was reconstructed twice. Then Sultan Abdul Majeed the Ottoman Empire ruler extended and redesigned the Mosque.

50 Most Beautiful Mosques Around the World (Location & Size)