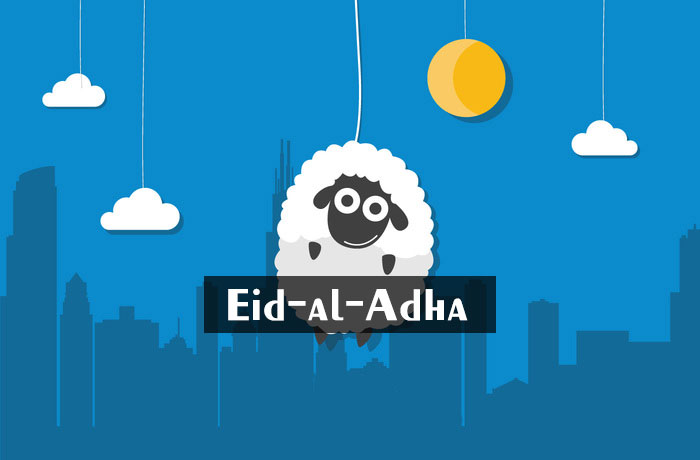 Eid-Ul-Adha, also known as the Feast of Sacrifice in United States of America by the Muslims, is celebrated every year in the Islamic month of ZulHajj.

People greet each other by sending Beautiful Eid Mubarak Wallpapers to family and friends.

In this festival of Muslims, a sacrifice of some specific animals is required in order to remind the reluctance of Hazrat Ibrahim (A.S) to sacrifice his son to Allah.

Narrated: Ibn Umar
The Prophet (p.b.u.h) used to Nahr or slaughter sacrifices at the Musalla (on eid–ul–adha). Sahih Bukhari Chapter No: 15, The Two Festivals (Eids)

It is a Muslims festival who celebrate this event as a reminder of the total submission of Hazrat Ibrahim (A.S) to Allah who became ready to sacrifice his son on the command of Allah.

However, Allah showed his messenger a miracle of replacing the son of his messenger with a Cattle. Since then, Muslims celebrate Eid-Ul-Adha by performing the sacrifice of a Halal animal.

Many Muslims of US celebrate this festival by gathering after the Eid prayer which is performed in congregation in a Mosque.

They also perform the sacrifice of some animals which is mostly distributed among the poor and the needy, and some of the relatives.

Moreover, in often places, there is a traffic jam outside the mosques on the day of Eid.

There are no restrictions upon Muslims to celebrate in a way they want to.

Being a non-Muslim country does not mean that Muslims will always be suppressed by the non-Muslims. This concept of people is clarified by the action of US government.

Therefore, Muslims can make all the preparations of Eid-Ul-Adha from free will, even in the USA.